The versatile multi-pollutant control system is a low capital and operating cost solution for removing acid gases, nitrogen oxides, mercury (both ionic and elemental) and particulate matter (including PM 2.5) concurrently. Units consist of one to six identical sub components, which can be installed in stages consistent with regulatory deadlines and the individual needs of the plant. The system can be implemented with integrated single-stage oxidizer NOx removal or with a second stage that utilizes ammonia-based reactants for additional NOx removal efficiency.

The System consists essentially of a traditional circulating dry scrubber, close-coupled to a high-efficiency, high-ratio fabric filter, integrated with a low-temperature oxidizing reactor.

is an efficient and cost effective way of addressing emissions from boilers, refuse derived incinerators, kilns and other industrial processes. The process employs a bed of hydrated lime to neutralize acid gases and other pollutants in the gas stream, which are then collected in the fabric filter component to MACT levels. Upstream of the dry reactor and fabric filter components of the system, an oxidizer is combined with an activator and injected into the gas stream. This proprietary reagent converts NO to NO2, after which it is ultimately converted to nitric acid then neutralized in the reactor. The formation of nitric acid, along with the oxidizer itself, aid in Hg capture by converting elemental Hg to ionic Hg, a form of mercury that is easily captured by filtration.

Among the many innovations, one of its principal features is the integration of classic poppet valves into the established CFB type reactor design, allowing for a simple, low-cost way to isolate one of more of the reactor components and fabric filter compartments for turn-down or on-line maintenance. To protect against potential surface corrosion, a regeneration and heating system is installed in a recycle loop to return each fabric filter compartment to favorable process conditions after it has been taken off-line. The poppet valves and regeneration system also allow for compartment isolation without worries of acid gas condensation-related corrosion or that dangerous gases will release to atmosphere due to lack of sorbent on the filter surfaces once the compartment is brought back on line.

The System consists of well established air pollution control technologies with a few twists. Firstly, a single CFB reactor is replaced with multiple reactors which can be isolated to maintain removal efficiencies at all operating gas flow rates. Secondly, the reactor components are installed within an envelope of the fabric filter housing, allowing for lower gas temperatures and higher reduction efficiencies. Thirdly, the off-line regeneration system is included as an integral system component to maintain filter compartment temperatures above dew point during filter regeneration and on-line maintenance, and to regenerate the dust cake onto the filter surface prior to bringing the filter compartment back on line. With our system, acid gas removal rates are sustained even after compartment regeneration, eliminating acid gas corrosion, and in turn, allowing the use of low cost, non-membrane filter media. Finally, since very low gas temperatures are achieved, Hg removal efficiencies are maximized.

The System’s design, which provides for multiple identical sub units in conjunction with the poppet valve feature, enables only a portion of the system to be run under situations of low load or production output, substantially reducing operating costs while sustaining MACT level pollutant removal rates. 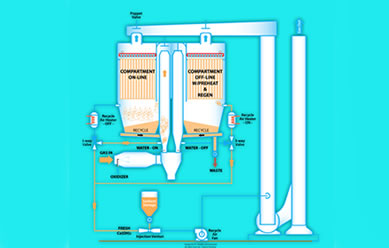 The system is a highly efficient method for removing regulated air pollutants at the lowest possible cost. The System provides an efficient and cost effective way of addressing emissions from boilers, kilns and other industrial processes. In addition, the system may effectively remove acid gas, PM, NOX and Hg which make it suitable for Hazardous Waste Incineration Plant.