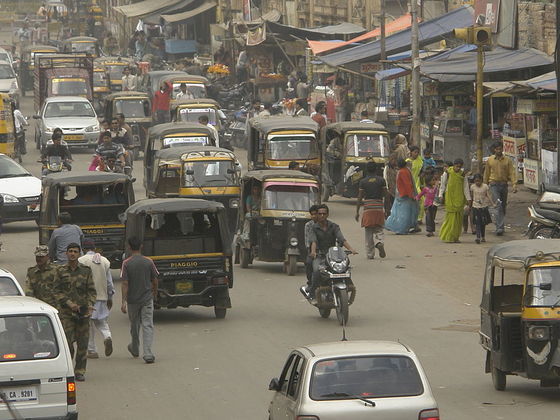 Gwalior, an historic city in northern India, has the country’s worst air pollution (Image by Yann)

Deteriorating air quality in India has placed 14 of the country’s cities in the top 30 of the world’s most polluted urban areas, new data from the World Health Organisation (WHO) showed this week.

The organisation released the data on May 12 on levels of particulate matter in 3,000 cities in 103 countries, figures that are often cited by those seeking tougher action against smog.

Global air pollution levels rose as much as 8% in the five years between 2008 and 2013, the figures show, with people in developing countries having to endure the worst impacts of increasing use of coal, vehicle fuels, construction materials and fertilisers.

Zabol, a small city near Iran’s increasingly arid border with Afghanistan, topped the list, with Gwalior and Allahabad in India ranking second and third.

Patna and Raipur were placed sixth and seventh, underlining that smaller cities in the world’s second most-populous country are bearing the brunt of smog and toxic air.

“At the same time, awareness is rising and more cities are monitoring their air quality. When air quality improves, global respiratory and cardiovascular-related illnesses decrease,” she added.

Air pollution causes more than 3 million premature deaths worldwide every year, and disproportionately affects the young, old and poor, the WHO report said.

As urban air quality declines, the risk of stroke, heart disease, lung cancer and chronic and acute respiratory diseases, including asthma, increases for the people who live in them, the WHO added.
Urban air pollution also has other negative effects, such as when PM 10 particles deflect heat and make urban areas warmer, contributing to climate change in lower altitudes, the report said. 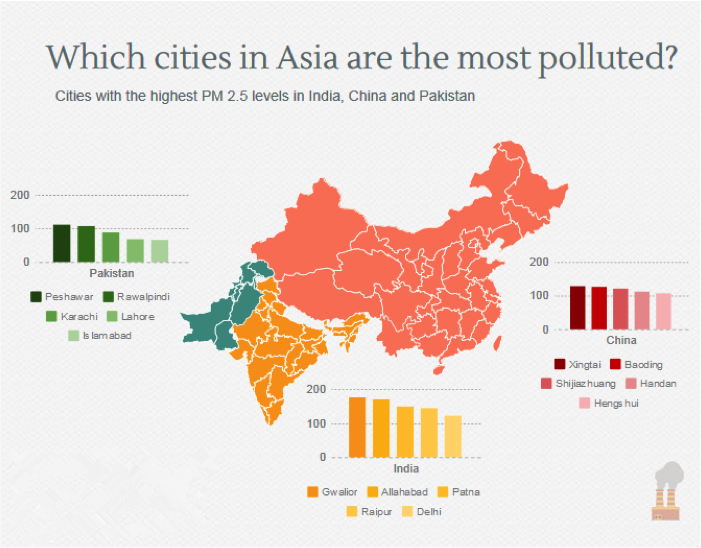 The WHO figures show that China, the country that had become the most synonymous with air pollution, has delivered improvements its air quality since 2011 – albeit from a low baseline.

Five of its cities (all in heavily-industrialised Hebei province) are in the top 30, with fast growing cities in Pakistan, Bangladesh, Saudi Arabia and Iran also on the list of most-polluted urban areas with the highest levels of PM 2.5, tiny and toxic particles that are drawn deep into the lungs.

“This indicates air pollution is now a national crisis and needs strict and aggressive nation-wide action across all cities of India,” Anumita Roychowdhury, executive director at Centre for Science and Environment, said in a statement.

Delhi’s air quality has improved (again, from a low baseline) since it was ranked the world’s most polluted city in the WHO’s 2014 global database.

“Air policy action has started kicking in – with an environment compensation charge on trucks, action against other sources. We are responding to action but the levels are still very high in the city, it only shows that action has to be sustained to meet clean targets,” Roychowdhury told the Times of India.

For China, their rankings show that much still needs to be done in Hebei, which last week was upbraided by central government inspectors for not doing enough to close polluting factories.

The five Chinese cities in the top 30, Xingtai, Baoding, Shijiazhuang, Handan, Hengshui and Tangshan, are major centres in industries  such as coal mining, iron and steel, chemicals, cement and building materials – sectors that central government is trying to rein in because of overcapacity and their role in causing pollution.

The province’s pollution is also caused by antiquated coal-fired boilers used during the cold winter months, while many vehicles use poor quality fuel.