The world’s appetite for meat and dairy products is contributing to smog in cities, says new research 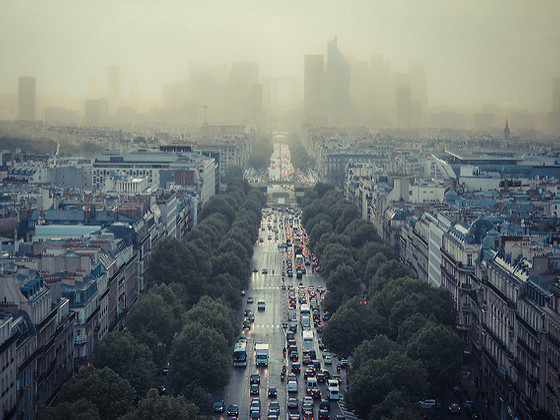 The Avenue des Champs-Élysées in Paris with a smoggy La Défense in the background. Photo by Damián Bakarcic

Farming is the biggest single cause of the worst air pollution in Europe, says a new study, which found that drifting clouds of compounds from nitrogen-based fertilisers and animal waste are combining with fossil fuel use to pose a major threat to human health.

The research confirms the findings of other recent studies that identified air pollution from farming as a major cause of particularly bad bouts of smog seen in cities such as London and Paris.

The new research, which was carried out by the Earth Institute at New York’s Columbia University and published this week in Geophysical Research Letters, poses major challenges to governments in developing countries, where the growing appetite for meat and dairy products has prompted a huge increase in fertiliser-intensive agriculture and animal wastes.

“To assist policy makers, it is important to connect the chemical composition and severity of particulate pollution to its sources…In many densely populated areas, aerosols formed from gases that are released by fertiliser application and animal husbandry dominate over the combined contributions from all other anthropogenic [manmade] pollution,” the report’s authors said in a foreword.

It added that emissions from agriculture combine with the heavy pollution from cars, power stations, factories and construction sites to producing a highly-toxic soup that is a major cause of PM2.5. These tiny particles are breathed deep into the lungs and are deemed extremely harmful to human health.

Last week the World Health Organisation said toxic air was responsible for the early deaths of 7 million people worldwide, particularly in the elderly and children.

The Earth Institute research cited agriculture as the single biggest contributor of manmade PM2.5 emissions in Europe US, adding that China “shows the highest concentrations of agriculture-related air pollution”. In India, the impact of agriculture in contributing to manmade smog was relatively low, the study added.

The Columbia University study concluded that if agriculture can shift away from ammonia-based fertilisers, then increased food production won’t necessarily lead to an increase in PM2.5 emissions.

While there are alternatives to nitrogen-based fertilisers, such as those used in organic farming, they tend to be more costly, labour-intensive and produce less yield.

The use of nitrogen-based fertilisers is also blamed for many other major environmental problems, such as the erosion of soil and the poisoning of lakes, rivers and seas. The manufacture and use of these compounds is a major source of greenhouse gases, including the highly potent nitrous oxide.

Meanwhile, a decisive shift away from the burning of coal in power stations and industry, and a move towards greener vehicles, would reduce the impact of pollution from farming that uses nitro-fertilisers, mainly because all of these sources combine to create some of the most toxic forms of smog in cities.

PM2.5
About the author